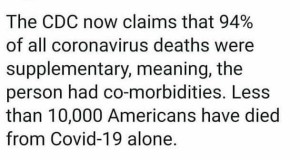 According to “Politico Fact Checkers” – the source Facebook uses to fact check information, cited the following:

Quote “As the epidemiologist and science writer Gideon Meyerowitz-Katz explained in a recent post, “it’s pretty rare that someone wouldn’t have at least one issue caused by coronavirus prior to their death, and all it means is that in 94% of cases people who had COVID-19 also developed other issues, or had other problems at the same time.”

“Meyerowitz-Katz notes that influenza and pneumonia are listed as the most common concurrent diseases, which isn’t surprising. “Similarly,” he writes, “respiratory failure, something that the coronavirus directly causes, is listed here as a ‘comorbidity’ that 55,000 people had.”

“So, it’s misleading to say that 94% of those who died with COVID-19 also had other ailments without explaining that the disease causes other serious illnesses. And it’s wrong to claim that only 6% of the recorded COVID-19 deaths were caused by the disease.” Unquote.

NOW FOR THE REAL FACTS. A simple TRUTH.

IN 2017: “2.56 million people died from pneumonia in 2017. Almost a third of all victims were children younger than 5 years, it is the leading cause of death for children under 5.” From Our World Data.

IN 2018: “About 1 million adults in the US seek care in a hospital due to pneumonia every year, and 50,000 die from this disease. than the age extremes, it is always a threat. Half of all non-immunocompromised adults hospitalized for severe pneumonia in the US are younger adults (18-57 years of age).”

I can go further back, and on, and on with citational proof; but I digress for now. As you can see, the numbers are staggering and far WORSE than the “Country Closing Mask Wearing Fear Mongering Economic Destroying Agenda of the so-called Big C19.” No one from 2017 and onward were ever mandated to wear silly flimsy masks; so why all the fuss now, especially in light of so little casualty?

Now, notice what Meyerowitz-Katz said; he said quote: “Respiratory failure, something that the coronavirus directly causes, is listed here as a ‘comorbidity’ that 55,000 people had.” Unquote.

I’ve just PROVEN him WRONG and in ERROR. Pneumonia has been around for centuries. They are inflating the numbers by adding the additional diagnoses of Covid 19 onto both; a preexisting condition and any current conditions of various acute cases of influenza or pneumonia. If you have been following the various cases reported, you will know this to be true. I am told to do this everytime when performing my medical coding profession into a patient’s chart. Hence, on many occasions, if not most, its an ADD-ON.

Are you begining to see the light, now?